Lion Kills the Cub- A lesson of humanity 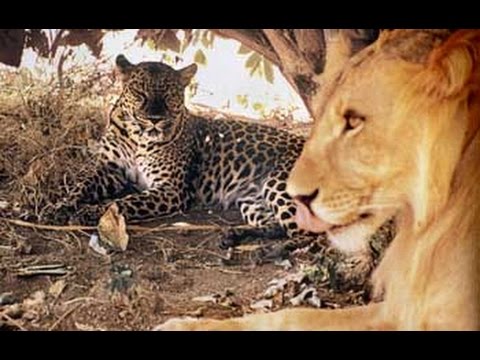 I was watching an episode of the Savage Kingdom Leopard Rock on National Geographic's           savage-kingdom-lions-leopards-hyenas This particular scene had me so surprised. It had to do with a lioness who was hunting and found a baby leopard cub.

The leopard the mother had gone off to hunt and when she returned looking for the cub she found that the lioness had captured the baby cub.

The leopard approached the lioness; not in combat because somehow the leopardess knew she wasn't a formidable opponent. Any such display of aggressiveness she too would have been hunted.   Gesturing to let the lioness know she had possession of her baby cub and that she had returned to retrieve him.

The lioness aggressively, warned the leopardess and leopardess backed off; BUT WAIT! Here's what happen next. The lioness could have easily eaten her catch the baby cub was in her mouth; but she turned her back to the mother leopard placed the cub on the ground and walked away.  The cub was dead.

The  mother leopard then grab the baby cub and pulled the dead cub up a tree and mourned until it was time to move on. The cub was dead why didn't the lion eat the cub she was hungry on the verge of starvation? It was already in her mouth?

This made a gazillion of thoughts reamed through the parameters of my mind. So many lessons I was taught from this single gesture.

I will always remember this episode and its impact on me. It made me think that even in our moments of desperation, hunger, pursuit, pain, rage, success and sorrow.

The gestures of compassion, civility, respect, humanity, morality, decency and equality is still powerful and that these simple acts are essential elements & examples or keys to success and survival of our brokenness.

How many people and souls need to perish before we realize that we are essential to each other in one way or another even if we are at two opposing ends.

God with his infinite power cast out Lucifer out of heaven made him a derelict. God with just a point of a finger he could have killed him. Abolished him. Even a dead and lost soul was still important to God. As a dead carcass is to a grieving mother leopard and a hunting Lion.

I am not a bible scholar or even in academia; but in my pondering. I am convinced that the manner we display our respect for our relationships and our actions toward difference is key; to the balance we all need to have in life.

Could it be or even suggested that God's purpose for Lucifer was for him to attempt to create chaos upon the earth; so one's soul, heart and mind can appreciate his grace his mercy? Hence, then being led to salvation eternally with him.  To prove our honor, our loyalty our love to him and his kingdom.

The process of only the fittest shall survive. The coach putting athlete through drills to equip him or her for winning or mastering the desired sport.

Could it simply mean that the lioness realizes that at some point she will have cubs and she; also will have to hunt at the risk of putting the tender ones in possible imminent danger.

At some point she may even meet a same familiar, savage peril. As this is their course of life.

In this life; you will have to do what is necessary to survive. In your coarse of surviving make sure on every ground, Your stance, perceptiveness and positioning whether it's triumph or failure that your consideration is greater than your conquest, supremacy or Vanquish.

Be just and humble.

3 Do nothing out of selfish ambition or vain conceit. Rather, in humility value others above yourselves, 4 not looking to your own interests but each of you to the interests of the others.

Photo https://i.ytimg.com/vi/qNWtY-u-GCQ/hqdefault.jpg
(I do not own rights)

How deep is your Love for God